Hit enter to search or ESC to close
Information

Joe and Brenda, a couple in their mid-60’s live in a 2 bed ground floor flat; Joe has lived there for a number of years, whilst Brenda moved in with Joe 2 years ago. They complained to their landlord about noise from Lucy’s children, aged 4yrs and 14yrs, who live above in a 2 bed first floor flat. Lucy has lived there for 6 months after escaping an abusive marriage. The older boy is autistic.

After numerous visits to both households from the landlord and police, they were referred for mediation; all agreed to this intervention.

The mediators met (virtually) with Joe and Brenda and Lucy on two separate occasions before bringing them together for a virtual Joint meeting. The first meetings provided an opportunity for each of them to describe the situation from their perspective and how it was impacting.

Joe and Brenda alleged that the noise was continuous and was mostly banging from the 4 year old running around and stamping his feet. Added to this, Lucy could be heard shouting at the children to keep the noise down; in effect she was exacerbating the noise problem by trying to keep the noise down. Joe has been known to bang on the ceiling and he has threatened Lucy and her older son when they have come face to face outside the flats.

Lucy described feeling very vulnerable as she was a new tenant on a starter tenancy; she was worried that she would lose her home. She was struggling to cope generally as the boys were now sharing a bedroom which was particularly difficult for the 14 year old who needed his own space for homework and he also went to bed later than his 4 year old brother. No-one was getting much sleep and life is hectic.

Lucy was also concerned that she did not have access to a secure garden area for the family dog and her young son, so that he could play out safely. Joe and Brenda were claiming that Lucy did not have access to the rear garden and the landlord advised Lucy that she could not erect a fence as she had not been a tenant for 12 months.

Joe comes across aggressively and tends to speak loudly, sounding as if he’s shouting. Brenda is a calming influence and she challenges Joe when he starts to become agitated. Lucy felt threatened by Joe and this was triggered by her experience of living in an abusive relationship.

The second meetings focused on preparing them for the Joint meeting. It enabled them to identify the most important issues and how it was affecting them.

Both households described serious and chronic health conditions, Brenda had taken an overdose, Lucy was undergoing investigations for cancer and Joe suffered from respiratory problems. Levels of anxiety were extremely high.

Not unusually, it transpired that Joe and Brenda had befriended Lucy when she moved in, driving her to the GP and food bank and helping the older son to repair his bike. They all wanted to get on as neighbours, although Joe admitted that he would find it difficult to be ‘friends’.

At the Joint meeting, both neighbours had the opportunity to explain their issues and concerns and describe the impact it was having on them.

Joe claimed that the noise was ‘all the time’; however when the mediators explored this further Joe was able to pinpoint the particular times when the noise was causing him and Brenda a problem. The boys were up at 6.30am getting ready for school and this disturbed Joe and Brenda’s sleep and again at teatime when Joe and Brenda were settling down to watch TV.

Whilst mediation cannot address poor sound insulation, and everyone accepted that the structure of the flats meant that everyday noises could be heard, the level of understanding increased significantly when Lucy heard how the noise in the mornings and teatime was affecting Joe and Brenda.

Lucy did not directly mention her need for a secure/safe space for her young son and their dog. She spoke about how difficult it was living in an upstairs flat having moved from a 3 bed house with a garden. Interestingly, Joe and Brenda said they had applied to the landlord to erect a fence as this would provide a secure space for their two dogs (which had been known to jump over the lower fence). This provided Lucy with the opportunity she needed to negotiate the safe space she needed. Everyone agreed that this would resolve security and also access issues.  Joe and Brenda accepted that their dogs did bark continuously when left alone in the flat and asked Lucy whether this was causing her a problem. Lucy said it wasn’t a problem for her.

Finally, the mediators encouraged everyone to explore how they would communicate with each other going forward.

It was a successful mediation, with both sides acknowledging the effect on each other and agreeing that they did not want any animosity between them.  They agreed a number of points that create a platform for going forward and resolving any future issues in a positive and constructive way.

It’s important to mention that all the meetings are confidential and what people shared with the mediators during the separate meetings is not shared with the other household. This is one of the reasons the mediators support people to prepare for the Joint meeting by rehearsing what they want to say, understanding how that might be heard and bringing a future focus, whilst acknowledging the hurt/harm that has been caused by the previous behaviours.

It is sometimes the case that issues discussed separately and rehearsed are not always brought up in the Joint meeting; this was the case between Lucy and Joe and Brenda. Lucy in particular did not mention one issue that she had discussed at length with the mediators. The mediators have to assess whether to take a break and check whether they want to raise the issue and do they need help (this is done in break out rooms so that the conversation remains confidential).

The mediators ask a scaling question regarding impact on level of anxiety and this provides an indication whether mediation and talking with mediators is a positive experience. In this case the before scores were: 9, 10 and 7 prior to speaking with the mediators, reducing to 8, 6 and 4 immediately following mediation and further reduced to 5, 3 and 1 6 weeks later. 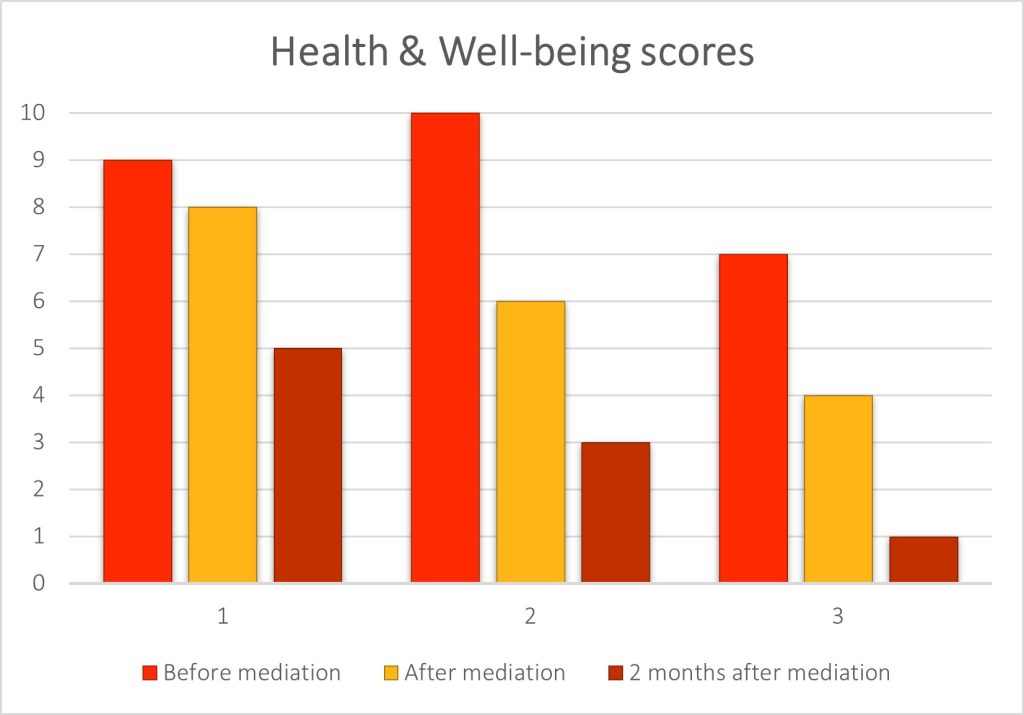